1200 Intrepid – The Building That Appears to Move and Flow

“The sidewalk starts to become a part of the building. You can almost see the front of the façade as the result of a ‘shock wave’.”  - Kai-Uwe Bergmann, partner, Bjarke Ingels Group (BIG)

Echoing the Iconic Shape of a Battleship’s Bow

High Concrete Group LLC (High Concrete), a High company headquartered in Denver, PA, played a key role in the construction of 1200 Intrepid Avenue (1200 Intrepid) in the Philadelphia Navy Yard, which is being revitalized as a business park.

The four-story, 92,000-square-foot office building features a one-of-a-kind “flowing façade” inspired by the curved bows of mothballed battleships docked a few blocks away in the Delaware River. Passersby may sometimes feel as if the façade wall is moving, especially with the glass reflecting sky changes during the day.

Under a $2.7 million contract, High Concrete produced 421 architectural precast panels (29,000 square feet of vertical surface) for the four walls of 1200 Intrepid’s exterior “skin.” Including the twisting, curving panels of the façade wall, they measure 15 feet high and 5 feet wide. Each window is framed by four of the panels.

To create the slope and curve for the facade, each uniquely shaped precast panel is positioned at a different angle and rotation.

The $35 million, architecturally influential building was designed by Kai-Uwe Bergmann, a partner in the leading architectural firm Bjarke Ingels Group (BIG), based in Copenhagen and New York. 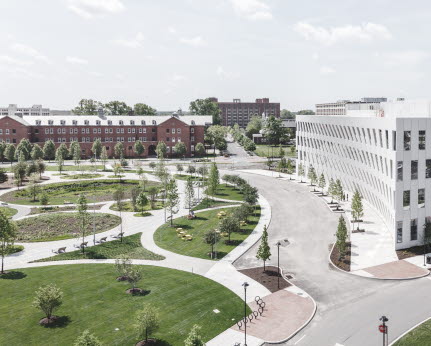 The multi-radius main elevation conforms to the design of the central park area. 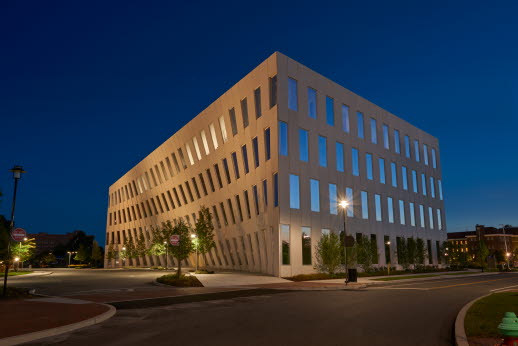 “The key challenge was how to orient the panels so they could achieve the look but still ensure they would close themselves together tightly at each connection.”  - Matt Krebs, High project manager

Early on in the project, as a design-assist partner, High Concrete provided success-factor solutions to prevent project problems. These included:

Check out our positions in Manufacturing and Engineering.

It's true that not everyone would enjoy that idea so much, but High's team jumped on it as a chance to show off their skills and products."  - Kai-Uwe Bergmann

The High concrete team embraced the unusual challenges of this project as an opportunity to excel. In true High spirit, the team set about making the architects’ vision a reality, employing innovative construction techniques to ensure seamless installation, structural integrity and aesthetic innovation.


High Concrete is a leading producer of architectural and structural wall panels, and the nation's largest producer of precast concrete parking structures. We've provided structure and enclosure systems, components, and accessories for virtually every kind of project, including some exceptionally complex buildings, such as this one.

At the High companies, we are fortunate to work with a team of talented and engaged co-workers, as well as the very best customers, business partners, and community leaders throughout our many locations in the Eastern and Midwestern United States.

With our headquarters and our organizational roots are planted firmly in Lancaster County, Pennsylvania—a vibrant and distinctively hardworking community that strongly influences who we are as a company—the values we espouse, including honest hard work, trustworthy relationship-building, and innovative leadership, are shared by all co-workers throughout the High companies. 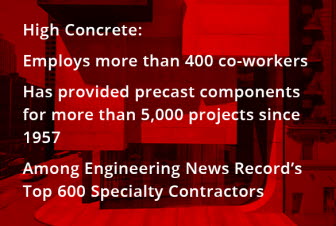 A New Experience in Shopping, Dining, Staying, and Living for Lancaster>>

READ MORE
GET  IN TOUCH